In grad school, when i was still living in Plainview, i rebuilt (read: got running) this terrible looking old Ford pickup.  I don’t know if it was the first of many quarter life crises, but it seemed imporant at the time.  It was ugly, but it had my first ever bench seat.  I thought this was an incredible idea and I thought that I now needed a girlfriend.  But when i got one, she only rode in it once and was not impressed.  Anyhow, the romance of the whole situation made me think of this song… 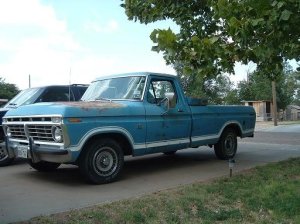 Recording is hard, in case you’ve never tried it.  Little mess ups that nobody cares about live, become deal breakers, your voice is so annoying to you its hard to stand, and you’re faced with how you really sound.  And then, you can get caught up in technology, microphones, mic placement, effects and the like until you are overwhelmed and you don’t finish anything.  So one night i set up a guitar mic and vocal at the same time, mic separation be damned, and pretended to perform for someone.  It was ok, not great, but ok, honest, and better than trying to sound professional.  Then Justin told me not to worry about the sound stuff, that people get caught up in sound and don’t end up accomplishing anything.  So i just decided to not obsess about sound quality, tempo, and the like and just perform for the microphone.

you know when you were a kid and you got stuck on funny songs and wanted to hear them over and over?  We got stuck on my Mom’s Dan Seal’s greatest hits cassette tape.  I still love this cheezy song and sing it all the time because i think it actually sounds like a real lost, heartbroken, rodeo cowboy would.  I thought I’d track it to try and get comfortable with a microphone in front of my face again.